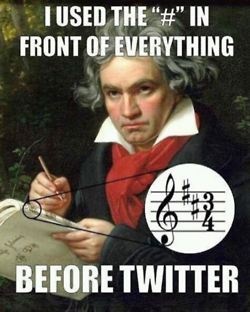 44% growth from June 2012 to March 2013; over 500 million users; 288 million monthly active users. All these stats translate to one thing: 21% of the world’s Internet population is actively on Twitter every month. These are only a few of the impressive results from the GlobalWebIndex Study. Being on Twitter is simply an essential communication channel for your brand these days. Here is Part II of our ideas for getting more Twitter followers.

As we’ve said many times before: Be careful not to hashtag every word in a tweet, but do pay attention to the trending ones. If there is a hashtag that is linked to your business, then use it. Add something interesting to the post and add one more hashtag – relevant to what you do.

Stay informed about what’s happening in your industry and what the influential Twitter users are organizing and tweet about them. Whether it’s a Twitter Q&A session or a meetup, it’s useful information and it gets people talking. If you are one of the first to retweet or mention it, that’s even better for you.

Know the secrets of Twitter and how it works? Why not share it with others then? You’d be surprised at how many users are still trying to understand how Twitter works and how they can improve their experience.

Find the best time for your tweets.

You can schedule your tweets in advance, but do your best to retweet and reply in real time. According to Bitly’s research, the best time to tweet is from Monday to Thursday, between 1:00pm and 3:00pm, unless it’s breaking news. Forget about tweeting on Friday after 3:00pm.

You can find users in your area with tools such as Twitaholic and Localtweeps. Building such connections has a big advantage – you can easily meet these people in person. Next thing to do using Twitaholic is follow the followers of influential people. This is a certain way to boost your followers’ base, just don’t expect that you’d necessarily interact with them. Use Your Tweeter Karma for bulk Twitter actions and Wefollow to find users based on a keyword.

Don’t forget that it’s essential to manage your followers/following ratio. If you have been following somebody for a while, but they haven’t followed you back, and they are not influential, you can add them to a list and then unfollow them. Nothing personal. You know what they say: “LinkedIn is for people you know. Facebook is for people you used to know. Twitter is for people you want to know.” So unfollow only those that you don’t mind losing.

By applying the above-mentioned techniques you will start seeing results, but don’t stop there. You need to make it your habit to measure and track data that seems useful. If you are using multiple Twitter tools, compare them and see which gives you the best results with the least time and effort required. weekly activity follow new people on a weekly basis.

Last, but not least, it’s important to organize all this information somehow. Create lists of useful accounts and users and engage with them. If you make the list public, other Twitter users can subscribe and find your brand.

Which tips do you use on a daily basis and which haven’t worked for you just yet? Share your experience in the comment box.

This website uses cookies to improve your experience while you navigate through the website. Out of these, the cookies that are categorized as necessary are stored on your browser as they are essential for the working of basic functionalities of the website. We also use third-party cookies that help us analyze and understand how you use this website. These cookies will be stored in your browser only with your consent. You also have the option to opt-out of these cookies. But opting out of some of these cookies may affect your browsing experience.
Necessary Always Enabled
Necessary cookies are absolutely essential for the website to function properly. This category only includes cookies that ensures basic functionalities and security features of the website. These cookies do not store any personal information.
Functional
Functional cookies help to perform certain functionalities like sharing the content of the website on social media platforms, collect feedbacks, and other third-party features.
Performance
Performance cookies are used to understand and analyze the key performance indexes of the website which helps in delivering a better user experience for the visitors.
Analytics
Analytical cookies are used to understand how visitors interact with the website. These cookies help provide information on metrics the number of visitors, bounce rate, traffic source, etc.
Others
Other uncategorized cookies are those that are being analyzed and have not been classified into a category as yet.
SAVE & ACCEPT
Powered by